We are still exploring Arizona and the different places to paddle. Today we diverted from our normal plan and headed out to Saguaro Lake to paddle stand up. I’d been out to Saguaro Lake (map) many times but that was all years ago and it was always to waterski so I didn’t really know what to expect with regard to SUP. We were excited to get to an Arizona lake with a bit more scenery and a bit cleaner water. 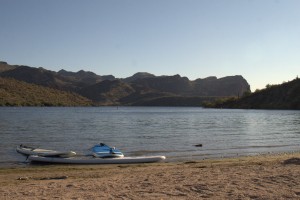 It turned out to be awesome and very different from Tempe Town Lake. We went to Butcher Jones beach. It’s a nice large beach with some sand(ish) and patches of grass. Looking at the water, it definitely looked a good deal cleaner than Tempe Town Lake. Plenty of area to set up a comfortable spot. There are also some nice amenities there but I didn’t really look too closely. I did see that there are grills, bathrooms and spots with shade but I was mainly there for the water.

The beach is pretty. It’s a little cove with some (kind of) sand. There are hills and mountains surrounding and there a couple lines of buoys a ways out for a no boat zone (inner line) and a no wake zone (outer line).

To get to the subject that most SUP fans care about, the water is indeed a good bit cleaner than Tempe Town Lake. At the time we were there (afternoon) there was also a lot more movement in the water. There was a strong wind and a good number of small waves rolling in. I’m guessing those were mainly from the boats passing out in the main part of the lake.

I’ve been thinking of trying one of those SUP races over in CA (since we don’t have many at all in Arizona). I know that paddling SUP in the open ocean will be far different from a closed body of water like Tempe Town Lake. While I paddled tons of open water off Long Beach, Kauai and Oahu, I still have yet to experience it on a SUP. Saguaro Lake was a good first step. I’m sure that the waves and chop were miniscule compared to open water but they were significant compared to TTL. 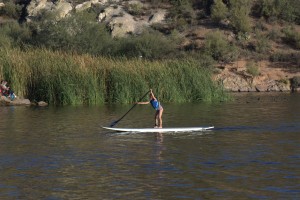 They made for a great workout. We loved the instability and the variety. Several hours later, I can tell I’m worked in very different ways than a typical TTL workout. My midsection and rib area are already a bit sore (which is cool). I think the instability caused many more muscle groups to be called into play.

Heading straight out a good distance (past both buoy lines) and then turning around and racing back in gave you a bit of a chance to work to catch some bumps. Nothing major but at least it was something. I didn’t think we were going to get that opportunity anywhere in Arizona.

I guess the telling thing to say is that we will likely be spending far more of our weekends at one of the outer lakes (such as Saguaro, Canyon, Pleasant) instead of Tempe Town Lake. The combination of cleaner water, chop and bumps and scenery definitely makes the additional drive worth it.

Some tips on SUP at Saguaro Lake…