There isn’t a whole lot that you need to get paddling. In fact you can just grab your paddle, push on out into the water and stand up & give it a shot.

There are some basics though that will help you out. One of my favorite subjects is technique and there are different schools of thought. We’ll definitely dig into those in the future but for now, we’ll talk about some concepts that are common among all.

Now to get on your board…

BOARD TIP: With regard to your board, the first thing to note is that hand well (if your board has one – and most do) is located right at the center of the board’s gravity. So when you get on your board, you want to kneel around it and when you stand up, you are going to want to stand up around it.

Getting On Your SUP

As you’re heading out, there are 3 main positions you can take.

And then to paddle…

PADDLE TIP: When paddling, one thing you need to do is find the proper hand position for you on the paddle. A good starting point is to hold the paddle up over your head and make sure you have about a 90 degree angle between your upper arm and forearms. That is a good rule of thumb and then you can experiment with your hands wider and narrower to see what works best for you.

Much, much more on this to come!!!

Here’s a good video by Jim Terrell of Quickblade Paddles as well: 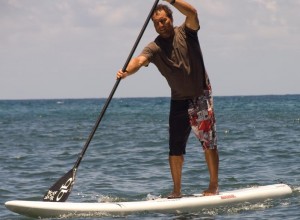 I came across a tip in Dave Kalama‘s most recent blog post on the 3 most common mistakes in stand up paddling that I really liked.

He gives a great analogy that really illustrates the need to keep the stroke light and fluid.

In case you don’t know him, Dave Kalama is one of the greatest watermen there is. At 46, he is still placing at the very top of the biggest races there are. He took 4th in the Maui to Molokai and Molokai to Oahu channel crossings in a sport that is being dominated by youngsters (a 16 year old having won most of the races this year). He is one of guys who invented tow-in surfing (along with Laird Hamilton, Darrick Doerner, and Buzzy Kerbox) and surfs the 60+ foot waves at Jaws off Maui. He also (along with Laird Hamilton) is responsible for making stand up paddling popular.

Heather and I were lucky enough to attend one of his Kalama Klinicks recently  in Newport Beach. We made the trip out to California just for this clinic & then headed right back to Arizona. Dave champions a “Tahitian” style stroke. It is a shorter stroke emphasizing reach and keeping all of the work in front of you (unlike the long “Hawaiian” stroke). I’m a big fan of his and his teachings.

The third and perhaps most important mistake I see, is people working way too hard. One example I’ve been giving people lately is this, imagine drinking a glass of water. You would grab the glass with very little effort, you would bring it to your mouth with very relaxed muscles, and doing almost no flexing of your muscles at all. Now imagine grabbing the glass with so much effort you almost smash the glass, imagine bringing it up to your mouth now with every muscle flexed like a body builder posing, the glass would be vibrating and water spilling over the rim. While that my be an exaggeration, I do see people exerting that type of force while trying to paddle. Paddling most of the time needs to be a very flowing and rhythmic action, not a tense muscle flexed series of positions, but rather a constant continually moving movie. Don’t get me wrong, there is a time and a place to exert yourself, but if your base stroke comes from a place of rhythm and flow, when you exert yourself you will be much more effective and efficient. The best fix for it is to greatly reduce your power level and learn how to use your technique as your driving force, not your power output. Decrease your power to the level that you don’t feel like you’re doing any work at all, and just concentrate on technique. You’ll be surprised at how fast you go. Just like drinking that glass of water, get to a point of calm relaxed movement before you start chugging.

With many of the top races being quite long (30+ miles) and most of the standard races being good distances (5-15 miles), it’s critical to develop a stroke that you can maintain for extended periods.

As Dave recommends, take some time practicing staying loose and fluid and see how it helps.

See his other top 2 tips at the 3 most common mistakes in stand up paddling.